Exodus 27:1-8; 38:1-7
The first element we come to as we enter through the eastern “gate” of the outer courtyard is the bronze altar.  The altar was a place of animal sacrifice and atonement; atonement simply meaning to make amends for something that was wrong.  As we begin this journey, realize also that this was the beginning of the worship pattern that God laid out for us. The altar is our place of offering, sacrifice and forgiveness.  It is also where we first meet God. 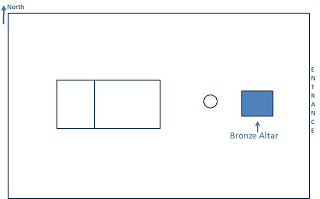 The structure was made of acacia wood, covered in bronze and its description can be found in Exodus 27:1-8.  The Acacia tree is commonly found in the Sinai desert and its wood is extremely durable while its branches carry sharp thorns (…and also perhaps the wood that made up the thorn of crowns for Christ). Actually, if you’ve ever seen the desert area where the Israelites were, you might say it is the only green, living thing found in that desert!  I grew up in Arizona and the deserts there would be considered an oasis compared to the desert of the Sinai peninsula! 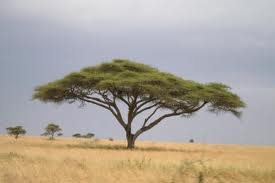 When someone brought an offering that was to be burnt on the altar, the Lord commanded in Leviticus 1 that they would bring a male animal without any blemish or defect.  The individual would bring the animal forward, lay his hand on the head of the animal and slaughter it themselves.  The priests would then take the blood of that animal and sprinkle it on the altar, making atonement for that individual.  They would then tend to all the other rituals that were to be performed with the animal for the burnt offering.

By laying the hand on the head of the animal, the individual had essentially passed on his sins to the animal that was offered as a substitute sacrifice to God.  In later weeks we will see that it was the blood of a sacrificial animal that was brought into the Most Holy Place by the High Priest for atonement and sprinkled before the Ark of the Covenant as a sacrifice on behalf of all of the people.  That blood was carried from the bronze altar into the Most Holy Place.

It is interesting that it appears that the original fire for the altar was not something that man brought; God lit the fire that consumed the offering when the priests began their ministry in Lev. 9.  It was to be continually lit and to never go out according to Leviticus 6:12-13.  Because of this, it was truly God who was accepting this offering from man, because it was God’s fire that consumed the sacrifice that man brought to the altar.  It was the blood of the substitute that came in contact with God’s fire which allowed atonement for mankind.

Digging Deeper:  Read through Leviticus 16. How do you view this passage as you compare it with 2 Cor 5:21?  What things come to mind as you ponder Christ as the substitute sacrifice?

Another interesting feature of the altar was its horns.  The horns of the altar were thought to be a place of help or refuge.  In 1 Kings 1:50-51 and 2:28 we find men who in fear for various circumstances, ran to the altar and took hold of the horns as a place of refuge.  The Bible never seems to clearly identify the purpose of the horns, but the symbolism to the Jews was probably significant.

Recall the story of Abraham and Isaac in Gen 22:1-19.  We know that God spoke to Abraham and told him to offer his son as a sacrifice.  Look closely at verses 12-13.  When God stopped Abraham from sacrificing Isaac, what did God do?  Most likely you already know the answer to that question; God provided a ram caught in the thicket as a substitutionary sacrifice.  What was the ram caught by?  His horns!  God secured the sacrifice in the thicket by the horns!  God offered help and a way out by the ram’s horns that got caught in the bush and so the rams horns holds a great deal of symbolism because of how God provided. 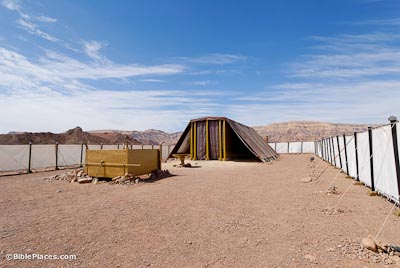 The Bronze Altar and Christ
One of the things that I like to do as I read scripture is place myself in the story and allow it to engage the senses. As I began to ponder how the altar (or service at the altar) compared to the life of Christ, I felt it might be appropriate to try and place myself at that bronze altar in that tabernacle complex.  What would it have felt like to be a Jew bringing an animal for sacrifice at that bronze altar?  What would go through my mind as I led an animal to the priest, knowing that I was leading that animal to a place where I would shed its blood?  How would it feel to have to physically take the life of an animal as a substitute for the areas in my life where I screwed up? I can’t imagine laying my hand on the head of that animal and killing it.  I can’t imagine how I would feel watching the blood flow out and the life taken away because of the stupid things I have done. I can’t imagine watching it struggle to breath and finally take its last breath – all because I messed up in my life.  How about you?  Can you imagine how you would have felt?  How you might have approached that altar?  Stop and consider what that scene might look like for you.

The beauty of the story though is that Jesus; our perfect unblemished sacrifice went willingly because He knew that it was for my benefit – and yours!  He endured death!  He endured the cross and most importantly, He rose again!  He willingly went there because He knew that His substitutionary death (just like that animal sacrifice) made a way for heaven and earth to connect!  It was His blood that was shed on the fire of that altar and accepted by the Father as atonement for my sin!  It was Christ’s blood that was shed that allows me to go hand in hand with Him and offer worship that is accepted in the heavenly realms by God the Father!  Ok… THAT knocks the breath out of me!  What about you?

God’s grace and peace to you until next time!

O, The Blood
by Thomas and Mary Beth Miller
http://www.youtube.com/watch?v=L1vDZJlTL_A&feature=related

VERSE 1
O the blood; Crimson love
Price of life’s demand
Shameful sin placed on Him
The Hope of every man

VERSE 2
Savior Son; Holy One
Slain so I can live
See the Lamb, The great I Am
Who takes away my sin

VERSE 3
O what love, No greater love
Grace, how can it be
That in my sin, yes, even then
He shed His blood for me

Holy, abandoned, passionate grace
Flowing along with the blood from your face
Seen from a distance, looked on with fear
Ultimate sacrifice to draw us near

Seemed like a failure, all hope was lost
Death cried triumphantly “where is your God?”
The whole earth was shaken with no one to save
When out of the darkness You conquered the grave!